Skip to content
Here’s a piece of research that we’ve recently carried out about the design and evaluation of Gymcentral, a web and tablet application that enables and motivates older adults to participate in group training sessions from home, under the supervision of a real human coach. Research has excensively shown that sedentary life is particularly damaging for older people, but efficient ways to engage seniors in an active lifestyle are still missing. Gymcentral makes training at home interactive, addictive and fun with online group-exercising, allowing seniors to meet new people, and train together in the gym class.
Our last article on Effects of online group exercises for older adults on physical, psychological and social wellbeing: a randomized pilot trial was published last week on Peerj, and reports on the physical, psychological and social wellbeing outcomes of Gymcentral for senior citizens.
The article reports on the results of a 2-months randomized trial with 37 participants between 65 and 87 years old, who followed a personalized exercise program based on the OTAGO program for fall prevention. Participants used a tablet-based application, featuring 1) the traditional individual home-based training program (Control group), or 2) the online group exercising (Social group). 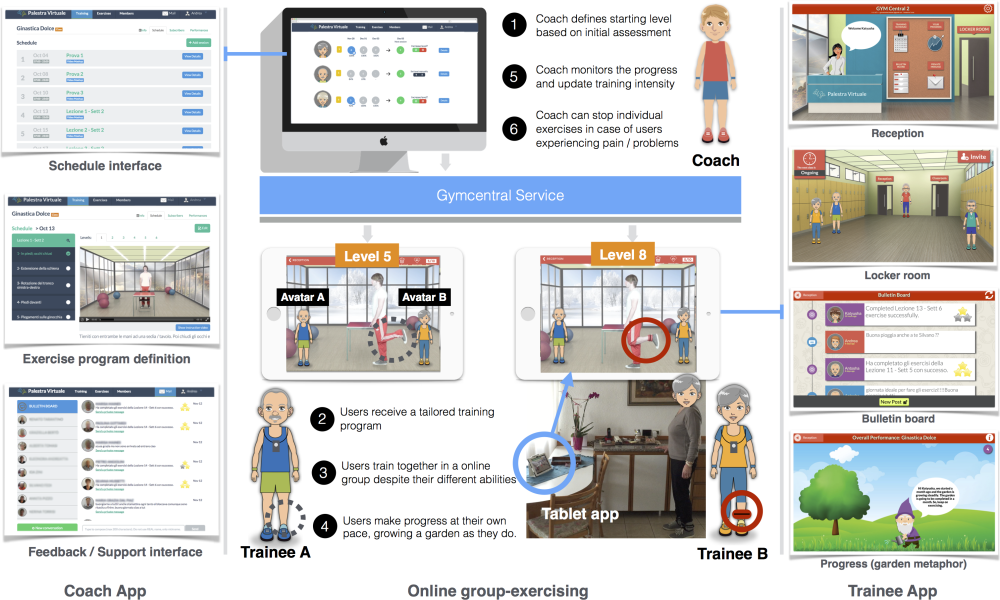 After eight-weeks of training both the Social and Control groups improved their physical performance, and both groups reached high levels of adherence. Considering the baseline measures, however, while in the Control group fitter individuals tended to adhere more to the training, this was not the case for the Social group, where the initial level had no effect on adherence.
Both groups also improved their psychological and social wellbeing. An interesting result is that, although social features played a part in motivating participation to training sessions in the Social group (Far et al., 2015), at the end of the study there was no significant difference between the Social and the Control groups in the loneliness scores. A plausible explanation for the improvement of the social wellbeing in the Control group is the frequent contact with participants via telephone. This is common practice in clinical evaluation studies involving older adults, where social visits to the control groups are performed to mirror the time and attention provided to the treatment group, and even suggested by several authors (for example, Hogan et al., 2001; Michael et al., 2010; Tinetti et al., 1994). Thus, it is noteworthy the significant decrease in the level of loneliness in the Social group despite the use of remote interactions and in such a short period. What is more, the online interactions in the form of private messages predicted the decrease in loneliness.

Our results indicate that technology-supported online group-exercising concealing individual differences in physical skills is effective in motivating and enabling individuals who are less fit to train as much as fitter individuals. This not only indicates the feasibility of training together despite differences in physical skills but also suggests that online exercise might reduce the effect of skills on adherence in a social context.

Moreover, the social features of Gymcentral, allowing participants to communicate remotely online, had positive effects in improving the social wellbeing of people in the Social group, who did not take advantage of telephone contacts as the ones in the Control group.

However, the results from this pilot are limited to a small sample size and therefore are not conclusive. Longer term interventions with larger sample sizes are recommended to assess the impact on wellbeing and behavior change.

PS: Gymcentral and it’s efficacy in improving the quality of life of older people have also been presented on the Italian national TV!